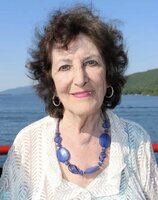 ALBANY – Marie E. Chochos, 85, of Albany, entered peacefully into her eternal rest on January 12, 2023, at St. Peter’s Hospital in Albany. The daughter of the late George and Harriet (Agnois) Fellios, Marie was born on February 18, 1937, in Brookline, Massachusetts. She previously lived and resided in Boston, MA and Portland, ME. Marie graduated from Portland High School and attended Lasalle College. She was formerly employed by St. Sophia Greek Orthodox Church in Albany as their church secretary. Marie has served as President of the Daughters of Penelope and was a member of the Women's Auxiliary of the Philotopkos. Marie loved to dance and was part of the first dance group at the St. Sophia Festival. Marie loved to laugh and had a contagious smile. She enjoyed cooking (especially Greek delicacies), working at the Greek Festival, and attending her beloved St. Sophia Greek Orthodox Church, but her greatest joy was her loving family. Marie will be warmly remembered as a loving mother, who was warm, kind, and very generous. Survivors include her son, Rev. George T. Chochos (Amie Anderson-Chochos), one grandson Christopher Anderson, and her beloved extended family residing in Florida. In addition to her parents, Marie was predeceased by her husband, Theodore Chochos, her son Nicholas Chochos, her brother Andrew Fellios and her sister Evangeline (Fellios) Samarkos. The family would like to thank the ICU staff at St. Peter's Hospital for their compassionate care. A small graveside service with family and close friends will be scheduled at a later time. Fond Memories and Expressions of Sympathy may be shared with the Chochos Family, online at: SimpleChoicesCremation.com