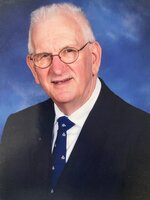 DELMAR — John William Albert Anson, of Delmar, passed away on December 30, 2021. He was born on March 29, 1938 in the Regiment of the Royal West Kent Army Hospital in Kent, England to the late Albert Anson and Edna (Nye) Anson. He was a pattern maker at Pressed Steel in Oxford, England where he was recruited by General Electric in Schenectady. He legally immigrated to the Capital District in New York with his wife Dorothy (Cofield) and their three children. He crossed the seas many times. His pattern making trade led to his love of all things from the 18th century but especially cannons. Many of his reproduction cannons can be seen throughout the country today including right here in the Capital District. He retired in the year 2000, after working for many years at the New York State Museum as a restoration specialist. One can still view his legacy at the museum in Albany via the old fire truck displays as well as the mastodon, and the wooly mammoth. He belonged to the Elsmere Rod and Gun Club as well as the Mayfield Yacht Club. He was an avid reader, history buff, and wood furniture maker. In his retired years he enjoyed spending time on his sailboat, The Centurion, on The Great Sacandaga. He was a member of the NY Masons Noah Lodge. He participated in the Brigade of the American Revolution, where he made many lifelong friends and traveled all over the east coast while reenacting events of the 18th century with his family. He leaves behind the love of his life Dorothy; his three children, Scott, Lynn, and Lee; his beloved grandchildren, Zachary, Grace, Beth (Schuyler), Dalton, Skyler, Laurel; and great-granddaughter Spencer. A special thank you to the wonderful staff at St. Peter's Nursing and Rehab Center. A celebration of life will be organized for the spring of 2022. No floral arrangements please. To honor John drink a big glass of water. You know you don't drink enough fluids.