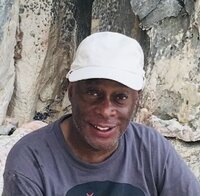 LATHAM- David was born on July 10, 1949 in Manhattan, New York, the son of the late David Richard Stevenson Sr. and Bernice Altimease Kennedy. He was the beloved husband of Veronica Blancada, son-in-law of Amancia Blancada and brother of Tami Stephany Floyd and George David Stevenson. David lived a rich, joyful and full life in his 72 years. He graduated from Andrew Jackson High School in Queens, NY, and continued on to Aviron Technical Institute in Montreal, Quebec where he graduated with a certificate as an Architectural Draftsman. David began his career at F.C. Hume and remained in Montreal until 1978. Upon moving to Albany, NY he served as a skilled and dedicated employee in his 32-year career as an Architectural Draftsman for New York State’s Office of Governmental Services. Many of David's interests and passions emerged in his early years. He loved basketball and would spend much of his free time playing pick-up games at the local playground, riding his bicycle with his best friend Lynwood and shadow boxing any place he could. As an avid sports fan, he loved the New York City teams - the Giants, Knicks, and Yankees. He would spend hours talking about the world series, super bowl, and NBA Finals. David collected sports caps for every team and championship and was a walking encyclopedia of sports stats. When David became an adult, travel became a new love. His adventures would take him to Dubai, Singapore, Hong Kong, Israel, Paris, Belgium, Malaysia, Spain, Morocco, Mexico and more. David’s fascination with trains (he was model train collector) resulted in his visiting 49 of the 50 United States and parts of Europe by rail. David exhibited a deep and abiding love for his family which began with his mother and father. He remained with and by his mother’s side until her death in 1992. Because of the age gap between David and his siblings, David as the eldest was looked upon as mentor and guardian by his younger siblings, a role he took pride in. He had a most special relationship with his brother George with whom he spent an immense amount of time bonding over their shared interests. The two were the keepers of special traditions, one of which was the importance of family. David also had a special bond with his sister Tami who could do no wrong in his eyes. The two enjoyed deeply engaging conversations balanced by lighthearted humor. While David had no children of his own, he had a fondness for young people and loved and adored his many nieces and nephews. David as a lifelong open-minded, non-judgmental, deeply spiritual man studied Hinduism, Islam, Judaism and Christianity. Notably, he read the Koran, Torah, Vedas and Bible from cover to cover. Ultimately, David chose Christianity as his religion and the Bible as his sacred scripture. David’s blessings and abundance continued as he began a beautiful new chapter with Veronica Blancada as his wife. They enjoyed 23-years of love, fun, and adventure. Seldom would you see one without the other. Through this union, David also welcomed new family members from all over the world and they in return embraced and loved David as a new addition to their family. David was a faithful, humble, generous, kind, gentle, and loving man and will be missed by all who knew and loved him. Services will be held on Saturday, November 20, 2021 at 1:30 pm at: Greater Grace Community Church 100 Saratoga Village Blvd. #17 Malta, NY 12020 In lieu of flowers, a memorial contribution may be made to: St. Peter’s Foundation David Stevenson 310 South Manning Blvd. Albany, NY 12208