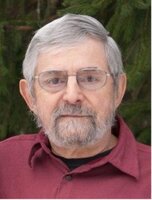 CLIFTON PARK- Wayne Thomas Peterson born March 25, 1947 in Troy to Robert Peterson and Katherine Peterson died at home on 10/20/2021 surrounded by his family after a long battle from COPD. Wayne graduated from Lansingburgh High School in 1966. He served in the U.S. Army from 1967-1970. He was trained in Microwave Communications for a Pershing Missile Unit. He is predeceased by his parents and a granddaughter Megan McCormick. He is survived by 2 brothers, James (Linda) Peterson from Michigan and Robert (Nancy) Peterson in Florida and several nieces and nephews. He has been married to his wife Nancy Groat Peterson for 50 years. They have 3 children Sonya (Matt) McCormick, Stephen Peterson, and Andrew Peterson (Robin Demers). He has 4 grandchildren, Jessica Peterson (Mark West), Stephen Beatty. Mackenzie and Logan McCormick and 1 great granddaughter Bailey West. He retired from Ross Valve in 2012 as a metal fabricator and molder. He enjoyed building models from scratch and running/flying them. He was a family man and enjoyed doing activities with the family including camping and traveling. Key West was one of his favorites. Wayne was forever grateful for his Wife and expressed to each of his children his extreme love and gratitude to his wife for being his caretaker and making it possible for him to live out his last days in the comfort of his own home with all his family by his side. There will be a celebration of Wayne’s life on Sunday October 24, 2021 at 1:00 at his home 6 Lindy Loop Clifton Park.