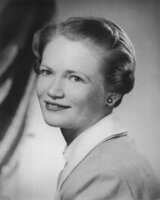 NISKAYUNA- Joan E. Halstead, 90, formerly of Niskayuna, NY, passed away on October 13, 2021, at Kingsway Arms Nursing Center. She was preceded in death by her husband, Walter B. Halstead, and her infant son, Bruce Bernard Halstead. Born in Schenectady, Joan was the daughter of the late Howard Walters and Florence Hart. Joan is survived by her son Howard B. Halstead (Melissa), her daughter Judith Ann Halstead (Jonathan Feinberg) and two grandsons, David Chudzicki (Allison Marie Smith) and Christopher Chudzicki (Sarah Sedney). Joan met her husband, Walt, in high school, where they both fell in love during history class. The day after turning 18, she married her high school sweetheart. She was a dedicated and loving wife, who often accompanied Walt on business trips around the US and overseas. Joan and Walt lived in Schenectady, Scotia, Glenville and then Niskayuna, but moved to Mandarin, FL when Walt retired. They traveled around Florida and orchestrated building of shuffleboard courts and arranging ad-hoc shuffleboard competitions in Mandarin. Joan enjoyed numerous lifetime activities including golf, curling, bridge, shuffleboard and boating. After Walt passed away and she returned to Niskayuna from Florida, her love for bridge intensified and she played in many local bridge groups, along with running Friday night bridge tournaments at the Mohawk Golf Club for a number of years. The family wishes to thank Kingsway Arms Nursing Center for their excellent and loving care of Joan. Memorial service will be held around Christmas, when she loved gathering with family. In lieu of flowers, the family requests that donations be made to the City Mission, 425 Hamilton St, Schenectady, NY 12305 or St. Stephen's Episcopal Church, 1229 Baker Ave, Schenectady, NY 12309.