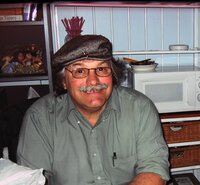 TROY- On Monday, September 27th 2021, Patrick Edward Panettieri, loving husband and father, passed away in his home surrounded by his family at the age of 71. He is survived by his wife Joanne, his 2 daughters, 2 grandchildren, 3 siblings and numerous cousins. Patrick was born on January 23rd 1950 in Peekskill NY to the late John V. Panettieri and Lois Gorley Panettieri. He was one of 5 children: the late Bernedette Barry Duffy, John V. Panettieri (Ella), Vincent Peter (Pete) Panettieri and Eugenia (Gina) Panettieri Fulton. He graduated from Peekskill High School in 1968, and he was a talented singer and guitarist. During high school he was the lead singer of the band, “Shadows on the Wall” and then the frontman for the band “The Playground” throughout the early 70's. He loved playing softball and was the founder and first president of the Peekskill Sunday Tavern softball league, which grew and continued for over 25 years. He was a devoted NY Yankees and NY Jets fan. On December 18, 1977 he married Joanne Meisoll of Peekskill NY. They were married for 44 years and had 2 daughters, Julia Anne Panettieri Lecig and Jessica Holland Panettieri, and 2 grandchildren, Caislen Noelle Lecig 20, and Ethan Patrick Lecig 13. In 1982 he gave his heart to the Lord Jesus Christ and spent the rest of his life in service to Christ and ministering to others. He earned a Bachelor's Degree in theology from Vision Christian University and became an ordained minister and pastor. He was a man of prayer whose life was an example of living by his faith. He was also a gifted worship leader who was able to bring people into the presence of God through his deep devotion to the Lord. Throughout his life he led many Bible Studies and prayer meetings. He spent 18 years serving the Chinese community in Brooklyn, NY through the Chinatown Outreach Ministry which he started in the late 1990's. In 2018 he started a bi-weekly prayer meeting for regional revival that continues now as Hudson Valley Revival Prayer. Throughout his life Patrick touched countless lives through words, deeds, songs and prayers. He left a God filled legacy and he will be deeply missed by all who were blessed to have had him in their lives. A memorial service will be held on Saturday, October 9, 2021 at Victorious Life Christian Church 1838 5th Ave, Troy, NY, at 2:00 PM. Arrangements are under the direction of Simple Choices, Inc. Cremation Service. To leave a special message for the family, please visit: SimpleChoicesCremation.com