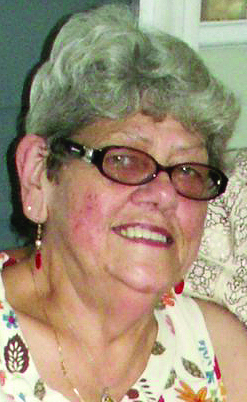 JOAN DANICE (BROWN) SAUCIER Saucier, Joan Danice (Brown) 76 years of age, passed away peacefully at home on January 22, 2012, with family and friends at her side. She was born August 9, 1935 in Concord, NH and moved to Stratford, CT as a young girl. She was the eldest child of John Daniel Brown and Eveleen (Sargent) Brown, both of whom predeceased her. She was a high school graduate of Stratford High School, class of 1954. She lived most of her life in Stratford and Putnam, CT and a retired machinist of Belding Heminway Textile Mill, Putnam, CT after 20 years. Joan was a veteran of the U.S. Navy in 1954 following the Korean War and was stationed in San Diego, CA. She loved reading (never having enough books), knitting, country music and most recently never missed an episode of Ghost Hunters. She looked forward to her weekly outings with Hospice volunteer Pat, her daily 7pm evening calls from longtime friend Jeanne, regular calls and visits from family and friends and watching her cat Fancy and dog Dottie play together. Joan was a lifetime member of the ASPCA and The National Humane Society. She was a beautiful &amp; loving mother and friend who never turned her back on anyone in need. She was preceded by her husband Roland P. Saucier, daughter Kathleen Joan Mayo and most recently her son Scott B. Saucier. She is survived by her sons Richard A. Pond, of Webster, MA, and Jay T. Saucier, of Putnam, CT; daughter Eveleen A. King (Robert Rhodes) of West Sand Lake, NY; sisters Mary Ann Piscitelli and Todd Simons of Missouri; brother Mark Sander; granddaughters Wendy J. Mayo, Shanon J. Ciukaj, Meagan Saucier and grandson Scott P. Saucier. Joan also leaves behind 5 great grandchildren, many nieces and nephews, and many dear close friends, including Jeanne, Brian, Matt (Lisa), and Pat her hospice volunteer and her hospice nurse, Sandy who cared for her for over a year. The family offers their sincere thanks and gratitude to the many nurses and aids of the Rensselaer Hospice Organization and their many volunteers for all their generosity and kindness during her time with hospice. A special thank you to Frank, who delivered her Meals on Wheels dinners daily (known to her as her Meal Man). The family would also like to extend their heartfelt gratitude to Dr. Lisa Thorn who cared for her several years above and beyond expectations with respect and compassion. There will be no calling hours and a Military Service will be scheduled for Inurnment at the Saratoga National Cemetery at a later date to be announced.