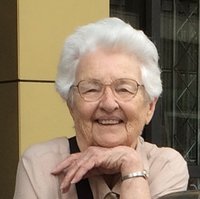 Albany, NY Mary Patricia “Pat” Bayne Walters, 88, of Albany, NY, passed away on November 29, 2020 following complications from cancer.  She was born to parents Nita Olivia Ridgell Bayne and George Clyde Bayne, on 23 July 1932 in Ridge, Maryland.  She was the fourth of five children.              She graduated from St. Michael’s High School, Ridge, Maryland in 1950.  She went on to study Business at Strayer-Bryant & Stratton College in Baltimore, Maryland.              In 1987, after 35 years of service in various administrative capacities with the Navy, Coast Guard, and Army, she retired from the US Federal Government.              She enjoyed traditional interest including reading, cooking, crocheting, solving crossword puzzles, and travel, but mostly she considered being a Mom the most important part of her life.                Pat and her husband lived a military life while mostly living and raising two children in Williamsburg, Va.  Joseph Clyde Walters and Sandra Marie Walters now live in Albany, NY.              Pat is survived by her sister, Ann Theresa Bayne Robrecht of Ridge, Md, her sister in law, Wilma Jean Bayne of Baltimore, MD, her children, and numerous nieces and nephews, great nieces and nephews, and most recently, great, great nieces and nephews.              She was preceded in death by her father and mother, George Clyde Bayne and Nita Olivia Ridgell Bayne, her brothers, Thomas Clyde Bayne and his spouse Barbara and Joseph William Bayne, and her sister, Margaret Anita Bayne Cooper and her spouse John.  Two nieces, a nephew and a great nephew predeceased her as well.              The family has entrusted cremation services with Simple Choices of Troy, NY.  Interment will be held in Ridge Maryland at the family burial grounds in St Michael’s Cemetery following the Covid19 pandemic.  Further details will follow at that time.  A Memorial Mass will be said by her nephew, Father Joseph William Bayne, OFM Conv.,  at the Basilica of St. Stanislaus, Chicopee, Massachusetts.              Her daughter and son wish to thank the staff at Hospice and No Place Like Home for their kind and loving care shown throughout the end of their Mother’s life   Tributes in her memory can be sent to:   Franciscan Friars of the Atonement Graymoor  40 Franciscan Way Garrison NY 1052