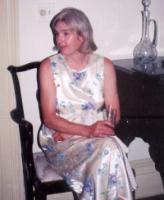 Schodack Landing Judith A. Archibald, 57 of Schodack Landing, died at The Hospice Inn at St. Peter's Hospital, Albany on Wednesday, November 17, 2010. Judi was the daughter of the late George A. and Helen Becker. She was also predeceased by her brother, George Becker. She was the beloved wife of Roger Archibald, loving mother of Katherine and Emily Archibald all of Schodack Landing. She is also survived by her sisters Joan (Paul) Constantine of Malta, Jean (James) Brennan of East Greenbush and Janet Becker of Schodack and sister-in-law Barbara Becker of Schodack as well as many beloved nieces and nephews. Funeral will be private at the convenience of the family.