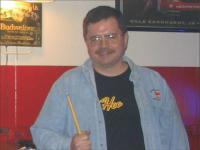 Hugh Dean Slingerland of Selkirk B. Sept. 26, 1961 in Albany, NY to Irene M. (Becker) Coons and the late Albert R. Slingerland. D. age 48 Jan 19, 2010 at St. Peters Hospice due to a malignant brain tumor. Hugh was local to the area and grew up here. He moved to S.C. during high school and graduated from Southside High School in 1979. As a senior he enlisted in the U.S. Navy as an IC-4728 Inertial Navigation Set Tech. During his enlistment he deployed twice on the U.S.S. Richmond K. Turner. Hugh's final naval assignment was as an IC -9502 Instructor in Chicago. Hugh held several military honors: Armed Forces Expeditionary Medal, Navy Expeditionary Medal, Navy Unit Commendation, Sea Service Deployment Ribbon (2 awards) Good Conduct Medal (2 awards) and a DTD Battle Efficiency Certificate. He was honorably discharged in 1988; involuntary early separation due to cutbacks. Hugh accepted employment with Owens Corning Fiberglass in Delmar that year and was an employee on the production line at the time of his passing. He was proud of his contributions to the United Way which Owens Corning supported. While at Owens Corning Hugh made many friends and was a dedicated employee. The entire year Hugh was ill, he spoke daily about returning to work. Hugh had a unique sense of humor and loved to play jokes on people. He was a comic book collector and as a child he often imitated his comic book hero's. Being the imaginative, witty and entertaining person he was, he even created a few himself. Hugh was a history buff and enjoyed reading about war strategies and battles, visiting Rhinebeck Aerodome, and Medieval Times. He took many trips south to visit family and go to amusement parks where he enjoyed roller coasters and fine dining. Hugh had an extensive collection of war biographies and history books. He enjoyed Sci-fi films and books as well. Some of his favorite writers include Tolkien, King, and Lucas. He was a classic hotrod enthusiast who owned a few of his own over the years and was in the process of narrowing down his next purchase of a Dodge Dart /Charger or Plymouth Duster when he fell ill. He was a Giants football and Yankees baseball fan whether they were winning or losing. He was a steak and potato kind of guy who loved to cook out. He made the best deviled eggs ever. Hugh was funny and one of the sweetest guys you would ever have the pleasure of knowing. He had a generous heart and kind disposition. He was always there for us whether we just wanted to smile or needed his help with anything and the void that is left behind will never be filled. Anything his nieces and nephews needed or wanted that their parents didn't provide, he provided. He loved to be the one they came to, often laughing because the parents had no control over his generosity. He leaves behind his mother Irene Coons, brother Albert Slingerland, sisters Holly Heck(Eddie), Delta Owens(William), &amp; Melody Coons(Earl), Five nieces-Terah Clifford(Mathew), Tori Mallia (Justin), Kelly Slingerland, Candace Tranah(David), Kaitlin Slingerland, and Four nephews-Michael Konduros, Dalton Konduros, Cody Witt and Hunter Slingerland and One great niece- Vivian Clifford (Terah &amp; Mathew). Hugh is also survived by his Aunt Joan Roy, and cousin's Sharon Hammond(Robbie), Alan Roy, Susan Virgilio(Frank), and Ralph Becker(Anne) and their children as well as extended family, coworkers and friends. Please light a candle &amp; leave a message faceting your fondest memory of Hugh. In lieu of flowers, please make contributions in his honor to the Onesquethaw Reformed Church (Thank you for your contributions, compassionate condolences and prayers.) Memorial Service will be held Saturday, February 6, 2010 1-4 p.m. Onesquethaw Reformed Church located at 11 Groesbeck Rd Feura Bush, NY 12067 Phone: (518)-768-2133 Columbarium Wall Inurnment with Honor Guard will be held Monday, February 8, 2010 @ 9 a.m. at the Gerald B.H. Solomon Saratoga National Cemetery, 200 Duell Road, Schuylerville, NY. Phone: (518) 581-9128